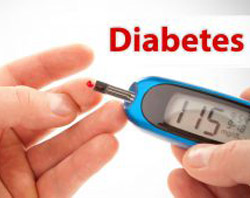 What is diabetes?
Diabetes is the condition in which the body does not properly process food for use as energy.
Most of the food we eat is turned into glucose, or sugar, for our bodies to use for energy. The
pancreas, an organ that lies near the stomach, makes a hormone called insulin to help
glucose get into the cells of our bodies. When you have diabetes, your body either doesn’t
make enough insulin or can’t use its own insulin as well as it should. This causes sugars to
build up in your blood. This is why many people refer to diabetes as “sugar.”
Diabetes can cause serious health complications including heart disease, blindness, kidney
failure, and lower-extremity amputations. Diabetes is the seventh leading cause of death in
the United States.

What are the symptoms of diabetes?
People who think they might have diabetes must visit a physician for diagnosis. They might
have SOME or NONE of the following symptoms:
• Frequent urination
• Excessive thirst
• Unexplained weight loss
• Extreme hunger

How prevalent is diabetes among blacks?
• Blacks are 1.7 times as likely to develop diabetes as whites
• The prevalence of diabetes among blacks has quadrupled during the past 30 years
• Blacks with diabetes are more likely than non-Hispanic whites to develop diabetes and
to experience greater disability from diabetes-related complications such as
amputations, adult blindness, kidney failure, and increased risk of heart disease and
stroke;
• Death rates for blacks with diabetes are 27 percent higher than for whites.

The body does not produce insulin. Some people may refer to this type as insulin-dependent diabetes, juvenile diabetes, or early-onset diabetes. People usually develop type 1 diabetes before their 40th year, often in early adulthood or teenage years.

Type 1 diabetes is nowhere near as common as type 2 diabetes. Approximately 10% of all diabetes cases are type 1.

Patients with type 1 diabetes will need to take insulin injections for the rest of their life. They must also ensure proper blood-glucose levels by carrying out regular blood tests and following a special diet.

Between 2001 and 2009, the prevalence of type 1 diabetes among the under 20s in the USA rose 23%, according to SEARCH for Diabetes in Youth data issued by the CDC (Centers for Disease Control and Prevention).