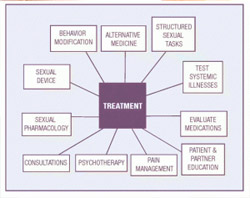 Sexual dysfunction (or sexual malfunction or sexual disorder) is difficulty experienced by an individual or a couple during any stage of a normal sexual activity, including physical pleasure, desire, preference, arousal or orgasm.

Sex and human sexuality are a core part of being human, so it’s natural to wonder about sex in all of its different forms. Sexual disorders are like people — they come in all different kinds of shapes and sizes. A sexual disorder doesn’t mean something is “wrong” with you. It only means that you’re experiencing the kind of issue that can suddenly affect anyone, at any time in their lives, for any reason or no reason whatsoever. While many sexual issues can be traced back to a physical problem or a sudden change in one’s life circumstances, many sexual disorders’ causes are not well-known or understood.

The good news is that nowadays, having a sexual concern such as erectile dysfunction (ED) or problems with getting aroused is no big deal. There are a wide variety of treatments — from medications to a specific form of psychotherapy — that can help virtually everyone with a sexual disorder, no matter what the concern.

Keep in mind as you read through this section that sexuality exists on a continuum. A concern only rises to the level of a “sexual disorder” if it is causing the person a great deal of distress in their life, and they would like to rectify the behavior or problem. Some of the disorders listed below are otherwise considered healthy parts of normal human sexuality. For instance, if a person has a fetish and he or she is fine with it (and it’s not causing other trouble in the person’s life), then it’s not considered a disorder.

One of the most common sexual dysfunctions, erectile dysfunction, is readily treated with medications. There are three drugs approved by the FDA to treat erectile dysfunction: Cialis, Levitra, and Viagra. All three of these medications are available only by prescription and work by increasing the blood flow to the penis. This allows for an easier erection in the man when he is sexually stimulated. Levitra works a little longer than Viagra and both take effect in about 30 minutes. In both of these medications, the effects can last between 4 and 5 hours. Cialis works a bit faster (within about 15 minutes), and the effects can last much longer — up to 36 hours in some cases.

What are the types of sexual dysfunction?

Who is affected by sexual dysfunction?

Sexual dysfunction can affect any age, although it is more common in those over 40 because it is often related to a decline in health associated with aging.